I didn't know that physical pain could bring so much happiness to my life! and is not being masochist, it is literally the feeling of accomplishment. After postponing my race in November due to an stress fracture on my left foot, I felt really down, however, the fact that I had the opportunity to race in January kept me going and looking forward.

I was very anxious about the race (Hits Naples), especially because of my lack of enough run training due to my injury. I could only make a 7 mile run two weeks prior the race day and that was it. But despite of all my doubts, I felt strong, I felt that my body and my mind were ready for this. 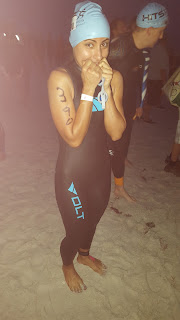 The week before the race I was nervous and anxious. I would tell my husband sporadically "I am afraid" and he will reply to me "then don't do it" and I will answer "Hell no!". So after joking for a week, the night before the race he told me: "you do this because you like it, you trained very hard for the last 6 months, you are ready so stop thinking about the future and enjoy it! Nothing bad will happen". Those words made me feel secure and strong, so I went to sleep like a baby.
It was a long race, so my coach recommended me to eat my breakfast (sweet potato pancakes, eggs and butter), 3 hours prior the start time. I arrived to my transition a bit late, but there was still plenty of time. While arranging my bike and running stuff, I spill one of my Vespa (for optimized fat metabolism) to the ground, I got a bit upset because I had all of them counted. I was very lucky to meet two of my teammates who helped me to calm down and one of them gave me the extra Vespa they had (Thanks a lot Debbie and Chris!!!!). 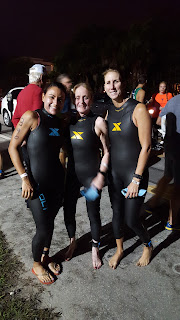 Once I had my wet suit on, we headed to the beach, it was a very foggy morning, but we were there to nail it. We could not see the buoys, so the 1.2 mile swim was not pictured on my head. At the beginning of the swim I could not breath, (I used the wet suit on the pool but never on the sea) so I tried a few strokes until I felt comfortable, and once I was, I started moving forward. It was a bit hard to see so I was basically counting the buoys and guessing, sighting every 10-15 strokes to not get lost. My total time was 49 minutes.

After leaving the water, I got help from some guys to pull my wet suit off (the picture captured by the Naples Daily News was my favorite) and got ready to leave with my bike.
The bike course was flat, but it was a bit windy and the fog was still present. Anyways, I was very focus, pedaling strong but not so strong. I wanted to make sure I had legs for the run, especially because I didn't train for it. I took a salt pill and a gel or Vespa every hour. My hydration was basically water and some coconut water. I never felt so concentrated and strong, I completed 56 miles in 3 hours 10 minutes. Once I got to the T2, I was tired, but highly determine to finish. 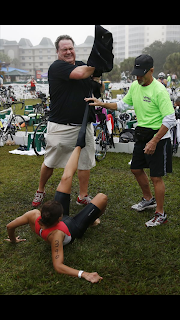 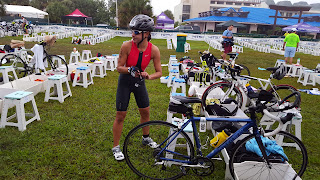 I got all my run gear on, took my Vespa and started moving. During the first 3 to 4 miles, my legs were tired and kind of adapting to the situation. I had a mental plan on my head to hit 13.1 miles: every time I run 3 miles, I will take a prize of walking for a few meters. So I put that on practice to help me move and to not stop too many times. After mile 5, I felt very strong, I felt like I was starting to run at my maximum, so I took advantage of that feeling and pull harder. I drank a cup of coke at mile 8 that boost me until the end, my total run was 2 hours 10 minutes.
During the race I did not have cramps or stomach issues, I followed all the suggestions from my coach, so thanks a lot to you coach!
Crossing that finish line gave me more satisfaction than anything before. Every sweat and pain was all worth it. I kept telling my family: "I still don't believe I did this" but yes I did it, and every time I think about it, I put a smile on my face, like right now. My total race time was 6 hours and 20 minutes.
When I starting my triathlon training on March 2015, I never thought on doing this distance. I just wanted to complete an sprint and olympic and that was it. But the truth is, that anyone can do it if they put the dedication, time and commitment. 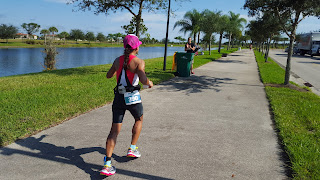 Now is time to plan my 2016 season, more training, more races, more pain and more happiness, because this is all about the feeling of accomplishment!!! 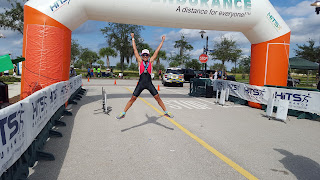 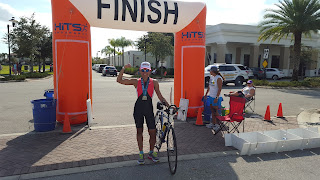